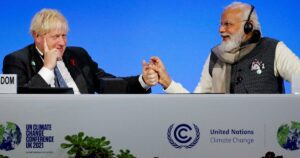 Pledges India has made:

What the press statement mentions

A press statement, following the Cabinet approval, only mentions two of these promises, namely that India is committed to reduce emissions intensity of its GDP by 45% by 2030, from the 2005 level and achieving 50% cumulative electric power installed capacity from non-fossil fuel-based energy resources by 2030.

NDC, or Nationally Determined Contribution, is a climate action plan to cut emissions and adapt to climate impacts.

Each Party to the Paris Agreement is required to establish an NDC and update it every five years.

What are the decisions taken in Glasgow Climate Pact